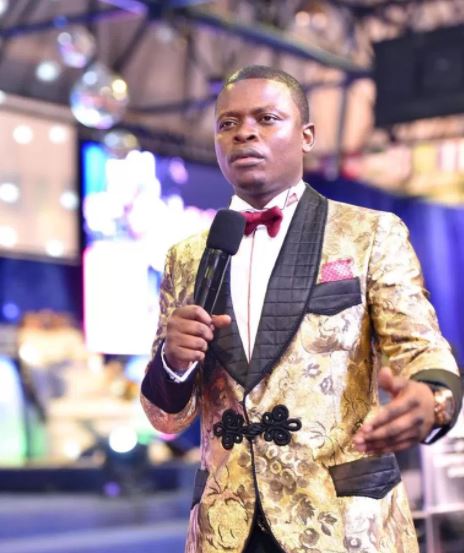 Malawi-born Shepherd Bushiri has an estimated wealth of £105m
A jet-setting preacher who boasts he can walk on air, summon angels and cure cancer calls his incredible £100m fortune ‘miracle money.’
Malawi-born Shepherd Bushiri packs out massive venues across the world thanks to his hundreds of thousands of devoted followers.
Entrance to next month’s ‘Enlightened Christian Gathering’ in Inglewood, California costs up to $505 a time.
It’s not surprising the controversial holy man has an estimated net worth of $150m (£105m).
And despite claims he is a fraud, Bushiri is still one of the "tunetest tickets" on the preacher circuit.
Those that can’t make his live shows have to make do with his hugely-popular YouTube site Prophetic Channel TV. 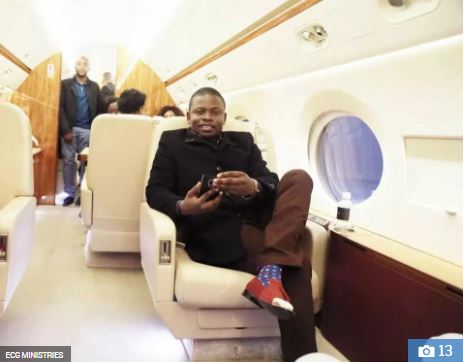 The wealthy prophet on board one of his four private jets
It is home to bizarre clips claiming to show him helping the crippled walk, the blind see and the healing of those with HIV.
One Video which shows worshippers ‘collapse in ecstasy as angels appear’ alongside Bushiri has been watched by millions.
Particularly popular clips tell Bushiri’s legions of followers how to fight demons, find love, and, of course, get rich.
However, it was a clip of the South Africa-based prophet ‘walking on air’ in 2015 which has become infamous.
Although, many saw it as a sign that he is truly the ‘chosen one’ others say it just proves he’s bogus.
His reputation was also rocked in 2016 when a woman came forward to say she had been paid to lie about miracles.
She said Bushiri paid a string of actors to stage being healed during his sermons. Allegations denied by the pastor.
Botswana even shut down one of his churches reportedly due to claims his "miracle money" appears by magic. 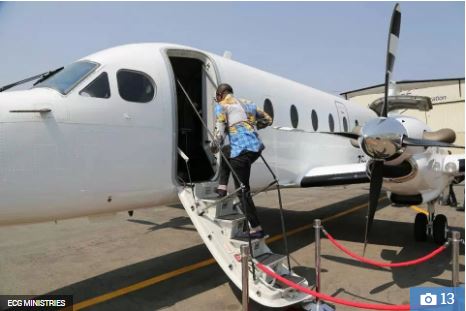 They are allegations the 30-something Bentley-driving preacher – known as  the Major One-  is aware of and casually shrugs off.
"My ministry is not for everyone, it is for those who have faith," he told the BBC earlier this month.
Bushiri bizarrely claims:
– He can cure cancer
– He can make the blind see
– He can summon angels
– He can heal HIV with prayer
– He can magic up money
– He can ‘cure’ the disabled
"I’m just a messenger of God’s work. God heals people in our meetings.
"One time I got doctors here to bring patients with HIV – they tested them before to show they are HIV.
"I prayed for them and again afterwards and now they were HIV-negative."
After being labelled a fake, over his stage levitating he invited cameras into his home to prove he’s for real. 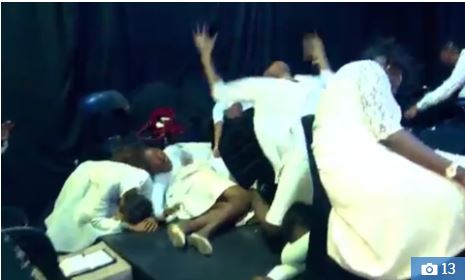 Worshippers appear to collapse on seeing the angels appear
However, the resulting Video did little to improve his credibility among his doubters.
The footage starts with Bushiri – his arms held aloft – walking down a wooden staircase.
At one stage his feet are clearly seen dangling  mid-air, but so are the shadows of those holding him aloft!
The Video has been viewed nearly 500,000 times after it was uploaded to YouTube by his followers.
They said the "hair-raising" performance had left the "Christian world thunder-struck."
It added to the legend of a man who claims he was visited by a messenger of God when he was 10.
One things that is sure about the father-of-two is just how far he has from his poor upbringing in Mzuzu, in northern Malawi.
Over the years he has amassed vast wealth and now owns several mines, four private planes and a number of tuneels.
When he bought his latest £25m Gulf Stream jet, he was informed he was the youngest person to buy he model.
His growing portfolio of possessions – including mansions across Africa – is managed by his businesswoman wife Mary.
However, he is far from ashamed about his fortune and accuses those who say he is profiteering of being racist.
"My success should inspire people to be entrepreneurs," he says.
"I am a businessman and that is separate from being a prophet. My prosperity is from private businesses.
"Such questions are not asked from leaders of white churches but when an African man prospers, then it’s a problem."
Although ticket sales make up a large chunk of Bushiri’s income, like all good brands he also has his merchandise. 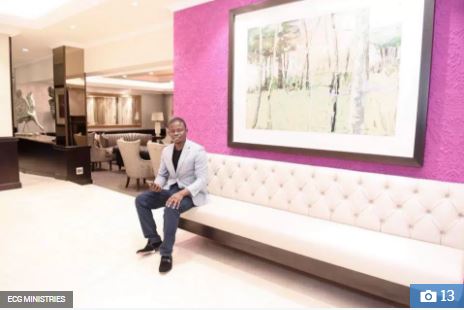 On a regular Sunday, about 40,000 people will gather to hear him preach and stalls selling calendars, t-shirts and caps are never far away.
Everything sold comes with the guarantee it has been personally prayed over by Bushiri giving it "healing powers."
One big seller is Bushiri’s anointed ‘miracle oil’ costing £10 a bottle,  which is pretty cheap as it can seemingly cure most ailments.
Not surprisingly, there are concerns South Africa’s liberal laws on religion – which allowed Bushiri’s rapid growth  – may be too relaxed.
A recent Government report exposed the huge profits being made from the sale of so-called faith products.
To make things worse, it is the country’s poorest people desperate to have their lives change for the better that are taken in.
Some churches even had members of their congregation eating rats, snakes, grass and drinking petrol to prove their faith.
Thoko Mkhwanazi-Xaluva, of the Commission for the Promotion and Protection of Cultural, Religious and Linguistic Communities, explained why
"South Africans are still hopeful of the Nelson Mandela dream but that makes them gullible and this is what these ‘bogus’ pastors prey on," she said.
***
Source: The Sun UK
--Advertisements--