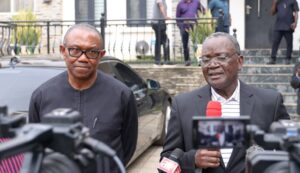 Governor of Benue State, Samuel Ortom has urged all candidates vying for the office of president in next year’s general election to put Nigeria above personal interests.

He made the call on Wednesday, July 21 when Peter Obi, presidential candidate of the Labour Party (LP) paid him a visit at his private residence in Abuja.

According to a statement, the Governor said that Nigerians are yearning for a leader with “commitment and competence” to bring an end to the years of bad leadership that has plunged the country into chaos.

He also said that the former Anambra state governor was one among those credible persons that Nigerians were looking forward to taking the country out of the leadership conundrum.

The statement read; “Governor Ortom commended the decision of the former Anambra Governor to engage Nigerians, especially major players in the country’s politics, irrespective of political leaning on his desire to serve as the country’s next President.

He said even though he was a major stakeholder of the People’s Democratic Party, PDP, the candidate considered him as a Nigerian to consult on his aspiration.”