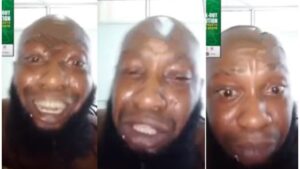 A young man has challenged the decision of the Edo state government to ban prostitution in the state.

He wept in a video about how unfair it is to chase away the girls from the state because they were serving a useful purpose for men who were depressed.

The man alleged that government officials would also be affected by the ban, so they are being hypocritical by kicking out prostitution.

Recall that the state government in collaboration with police launched operation kick-out prostitution and a series of videos which recently went viral showed when some girls were being chased away.

According to the guy, it was also not a good thing that no alternative employment opportunity was created for the girls before government chose to end their business.

Watch the Video Below: