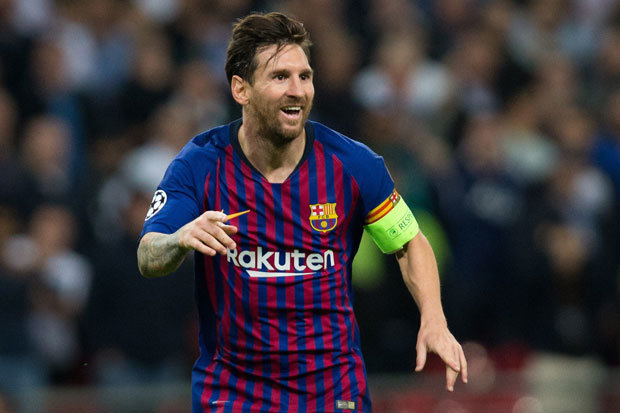 Lionel Messi
Even when not starting games, Lionel Messi makes his impression felt and produces – doing so again on Sunday night as Barcelona beat Leganes 3-1 at the Nou Camp.
With one eye on the Copa Del Rey quarter final first leg against Sevilla on Wednesday, Ernesto Valverde rested his talisman and captain for the game but when the visitors equalised through Martin Braithwaite in the 57nd minute, Messi’s presence was required.
And rather predictably, the five-time Ballon d’Or winner turned the game on its head almost single-handedly after entering the fray just after the hour mark.
His curling effort in the 71st minute was too much for Ivan Cuellar to keep hold of and it led to Luis Suarez putting Barcelona ahead again with the rebound.
Then, in stoppage time, Messi linked up gloriously with Jordi Alba and finished off the move with an exquisite finish with his right foot to take his tally to 25 for the season, his Barcelona record to 577 and his La Liga goals haul to 401.
But the most impressive statistic to emerge from the latest Messi masterclass, is that the 31-year old has scored more goals as a substitute than any other player in La Liga in the 21st century.
He’s been the first name on the teamsheet for years but has also bagged 22 times off the bench in league games. What’s more, he has a total of 34 goals and five assists in 76 appearances as a sub for Barca.
Messi seemingly breaks a new record every time he steps foot on the pitch – and it wouldn’t be a major surprise if finishes his career with more club goals than Pele – who notched 619 for Santos when you take out all the irrelevant ones he counts.
****
– SportBible