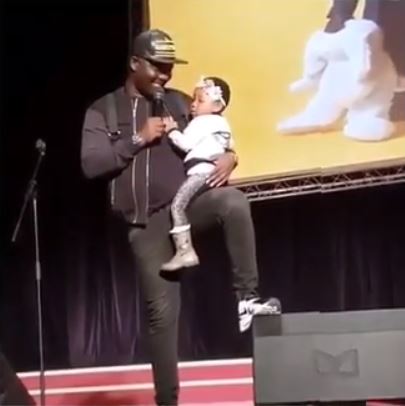 Seyi Law and his daughter on stage
A Video making the rounds on social media has shown the moment the infant daughter of Nigerian comedian, Seyi Law, got several rounds of applause from a crowd as she stood on stage with her father.
The girl, Tiwa, who is just one-year-old, was brought on stage by her father who proceeded to ask her some questions which were apparently out of her grasp being only an infant, however she was able to correctly answer them prompting a roar of applause from the crowd.
In the video, Seyi Law who was carrying the girl on his lap, asked her what the name of her country was and she replied "Nigeria". The crowd went wild with applause.
Not stopping there, the comedian went on to ask the little girl what the name of the Lagos State governor was and she correctly said "Ambode".
Watch the Video below: