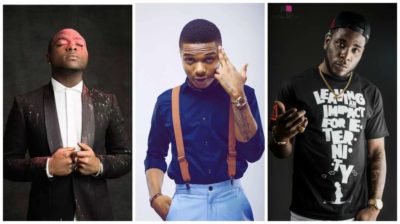 DMW boss, Davido has revealed that his colleagues Wizkid and Burna Boy are “ganging up” against him.

He made this known in a new interview with media personality, Ebuka Obi-Uchendu, where he talked about his family, music and more.

Ebuka asked Davido about the rift between him and Burna Boy, and Davido replied saying he has always been good with Burna, but was disappointed when he threw a shade at him and mentioned his dad.

“I have never mentioned your dad, come on bro” Davido said while replying Ebuka.

Davido then questioned why Burna was angry that he posted himself and Wizkid, but is always in London with Wizkid.

“Now you are angry that I posted me and Wizkid, right? But you are with Wizkid in London everyday” Davido said.

Ebuka asked; Do you think they are fighting you?

“That joining P together, that shit lame bro, that shit wack I can’t even lie. Joining to come and, what are you planning? We are all here, we are trying to take this music higher. Nobody will gang up against me, nobody for this Nigeria industry weh go gang up against me weh go work. Cos I don’t have a bad heart to anybody. I can’t lie, it hurts me sometimes” he continued.

PART 2! Meeting Naeto C in the early years, the root of perceived rivalries with Wizkid & Burna & backstory behind Tekno-produced hit, ‘If’.

I Won’t Let You Go Until You Bless Me – Upcoming Singer Receives N1.7M From Burna Boy (Video)

Baba Ijesha: TAMPAN bars directors from working with Nkechi Blessing Sunday and Iyabo Ojo, threaten to work against them

TAMPAN: Nkechi Blessing Apologises To Jide Kosoko Over Her Reaction After He Threatened To Work Against Her In The Industry