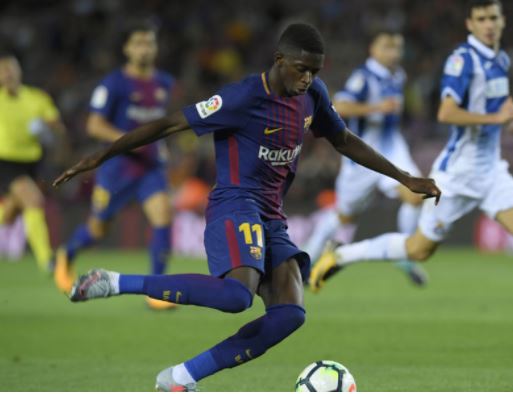 Ousmane Dembele
Ousmane Dembele does not fear fierce competition for places at Barcelona and will stay at the club to prove his ability after a difficult first season, the forward has told Telefoot.
A left thigh injury sidelined Dembele for three-and-a-half months in the first half of the campaign, just weeks after moving from Borussia Dortmund in a deal worth up to €147 million, and a problem with the same muscle saw him ruled out again after the turn of the year.
Since returning to fitness, the France international has struggled to establish himself in Ernesto Valverde’s starting XI.
Just seven of his 12 La Liga appearances this season have been starts, while the 20-year-old has started on the bench for three of his team’s last four competitive outings, including both legs of the Champions League quarterfinal exit at the hands of Roma.
“I signed a five-year contract at Barcelona. I’m going to be in Barcelona a very long time. I’m not going to leave after a season,” he said, adding that he remains short of peak physical fitness.
“I’m not in my best form, but little by little, it’s coming back. I still have to work on my cardio because I get tired very quickly.”
--Advertisements--