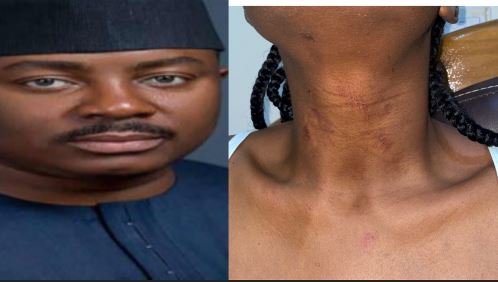 Mrs Kezia Robinson Uwak, a Nigerian woman has cried out, raising an alarm on Twitter about alleged attempts by her husband, Robinson Uwak, to kill her.

She alleged that her husband, a former federal lawmaker, attempted to kill her to prevent her from leaving their marriage.

Robinson Uwak was a member of the House of Representatives who represented Oron, Mbo, Okobo,Ure-Offong/Oruko and Udung-uko federal constituency of Akwa Ibom State at the 7th Assembly

“My “husband”, HON. ROBINSON UWAK STRANGLED ME and ATTEMPTED to kill me when HE FOUND OUT I WAS TRYING to leave the marriage & he did this right in the room where my children were asleep.”

My “husband”, HON. ROBINSON UWAK STRANGLED ME and ATTEMPTED to kill me when HE FOUND OUT I WAS TRYING to leave the marriage & he did this right in the room where my children were asleep. pic.twitter.com/OcleOhsbEr

Twitter users condemned the violence and advised her to report to a police station immediately before it turned into a case similar to that of the late singer, Osinachi Nwachukwu, who was allegedly killed by her husband, Peter.

A Twitter user, TundeDessy, immediately tweeted: “African will always listen to one side of the story and conclude. Did you overpower him and retrieved (sic) those weapons for snapping? You said he wanted to kill you? No doubt, did he later change his mind and drop the weapons for photo op. I condemn all forms of domestic violence.”

Another Twitter user tweeted: “Jesus Christ of Nazareth. Hon Uwak whom I love like what! A man from Udung uko who gave a serious headache to Sen. Akpabio when he was a Gov. Of A.K.S. Ofong Onwi… Why na? Pls for the sake of the kids. I don’t want to see you behind bars pls.

Another Twitter user, @mikky1 said, “save your life and run.”

@killdfeds tweeted, “Hope you have left that house, report to the police and tweeting (sic) from a safe place.”

@lestwist tweeted, “If you’re still living with him while tweeting this, you be idiot.”

When SaharaReporters contacted the husband, Robinson Uwak on Monday, he declined to comment.

He instead wanted to know the paper got his contact and thereafter switched off the phone.