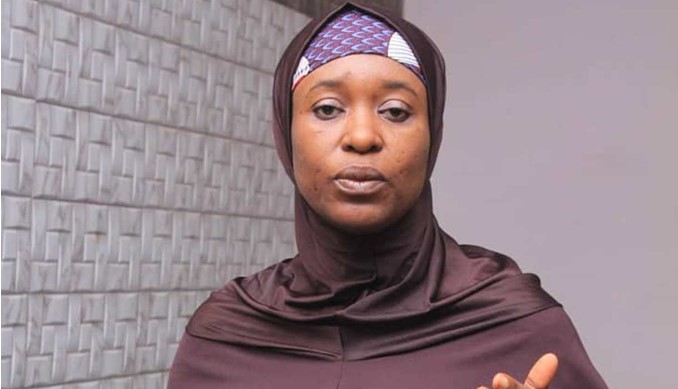 Co-convener, Bring Back Our Girls, Aisha Yesufu, has revealed that she’s never worn makeup since her childhood.

The mother of two took to her Twitter account to disclose this as she noted that she made the decision to not wear makeup right when she was a teenager.

According to the activist, she made a comparison with how boys are called handsome with their bare faces and said it influenced.

Yesufu explained her reason for doing so was because she believed that she can be described as a beautiful girl even without beautifying her face.

In reaction to her post @Ollirex1 asked ; Wat was d outcome?

Yesufu replied; I refused to conform to the standard set by society and just did me.

Other social media were heavily divided while sharing their thoughts as some took her side while others maintained that a woman needs makeup.

@emma_oribhabor; A guy’s face can be rough and people don’t mind. But for a lady, you must look good 99 % of the times. So ma’am please makeup!🥰

@Idi47; Aisha, it doesn’t work that way. A woman is supposed to look attractive and beautiful all the time.

@arome_onoja; please loud it, because our sisters of nowadays don turn ojuju because of makeup, they pay to much to look ugly, funny enough the men and boys have joined.

@Abhuluimen; This thing you just said ma’am was not revealed to you bu flesh and blood. Most ladies have lost confidence in themselves because of ‘cosmetics’. I am not condemning the use of it but have your confidence without it.

@IdorenyinEtuk5; When a woman knows her self worth she won’t depend on external things like cosmetics to define herself. Not that making up is bad but it’s like a man who has nothing except his money, such a man is an empty soul. If you can’t tap into who God has made u2b then u will look outside

@Dindumichaels; That’s what confidence is, not some girls of this generation showing off nipples, breasts, buttocks and posting themselves almost naked and tag it confidence. Infact, it’s a sign of chronic lost of confidence.

@SteveLukpata; Natural beauty is most enduring; besides, I believe that a woman is either Very beautiful, beautiful or just there. Make-up does not change this.

@SalihuG22995885; It is all a matter of choice and self confidence. Some women confidently go without make-up, while some confidently move around all made up. What is important is the human value inherent in them. Womanhood is not all about looking good, though looking good is good.

@monkiaso; Unnecessary fights we pick up, u refuse to conform by societal standard u say.
Even living up to who we adore u as, is conforming to societal standards madam Yusuf, cos ur understanding of Nigeria as not working, is due to her failing below a society standard for a workin society

@ObiEkene13; I wish other women will think like this. They are just spoiling their faces with make-up. Many times, it ends up make their faces less desirable.

@sameze2020; Personally i dont like make up and whenever i’m ready to marry i’d go for a lady that doesn’t makeup. Even if you’re going to do that let it be lite. Heavy makeup is a big turnoff to me.