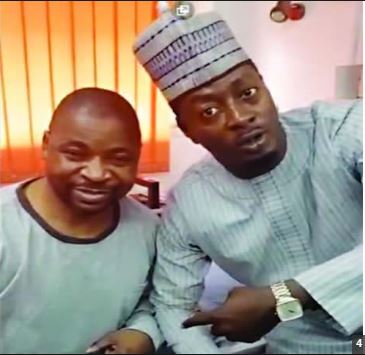 MC Oluomo and Taye Currency
Since MC Oluomo, a chieftain of the NURTW in Lagos, was reportedly stabbed at a political rally some days back, there have been a lot of rumours that he had died from the wounds sustained during the attack.
However, the rumours were finally put to rest when fuji artiste, Taye Currency, visited Oluomo in the hospital and uploaded a video of both of them together. However, some people criticised him for posting such video just to get attention.
In a chat with Sunday Scoop, Currency revealed why he posted the video.
“I had been inundated with calls from people that MC had died; so, I had to convince them otherwise. Everybody knows that whenever Oluomo comes to Ibadan, he is always at my place. We have been friends for over 25 years and are very close. Because of that, so many people were on my neck for proof that he was still alive. That was why I visited him at the hospital and made a video for the world to see that he was hale and hearty,” he said.
Disputing the fact that Fuji singers are always in bed with louts and violent people, Currency said, “Fuji musicians are not fighters. However, we are friends with everybody; we don’t have enemies. I went to visit MC Oluomo as a friend. I am not interested in whatever fight anybody had or has. If it was his opponents that were hurt, I would have visited them as well.”
On his plans for 2019, the singer said, “My 26-year-old son, who I had at the age of 19, is contesting the State House of Assembly election in Oyo State. He won the Peoples Democratic Party’s primary and will be on the ballot for the forthcoming poll. That is the major project I have before me now because I want him to succeed.”