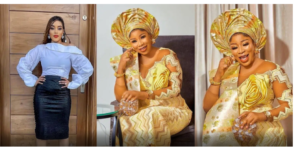 Sharing a touching experience with the actress, Adunni Ade characterized Kemi Korede who turned a new age on July 15 as a compassionate person and she recounted how Kemi Korede helped her throughout the cinema release of her film.

Adunni shared a photo of Kemi Korede, with the caption; “Happy Birthday to a kind-hearted person I know! You supported me during my movie release in cinemas for meet and greet and for that I am forever grateful. Have a blast this weekend mu darling”.