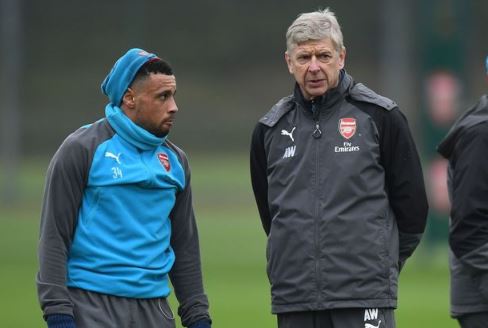 Francis Coquelin and Arsene Wenger
Arsenal boss, Arsene Wenger, has confirmed Francis Coquelin is set for a £10million move to Valencia.
Coquelin, 26, played his last match for the Gunners on December 28 in the 3-2 win at Crystal Palace. Asked after the 0-0 draw with Chelsea on Wednesday , whether Coquelin was about to leave Arsenal, Wenger replied: “Yes.”
“He goes to Valencia, he didn’t get enough games. I let him go.”
Wenger suggested rising star Ainsley Maitland-Niles, will eventually help to fill the void left by Coquelin’s departure.
“The best way to replace Coquelin is to get Aaron Ramsey Mesut Ozil back, that will help. After that we see.
“We have seen again that Maitland-Niles had an outstanding performance. He is a defensive midfielder, basically.
“What he is doing at the moment will help him develop as a player because he plays in a different position but at some stage I will play him in at defensive midfield.
“At the moment we have Monreal and Kolasinac injured and they will come back. So that is as well as opening for him in midfield,” he added.
--Advertisements--