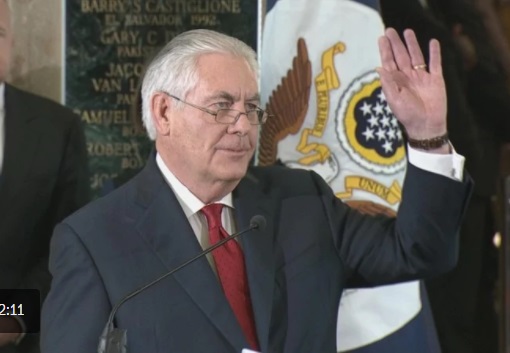 Secretary of State Rex Tillerson bid farewell to his staff at the State Department on March 22
The former U.S Secretary of State, Rex Tillerson, has appealed to State Department employees on Thursday to maintain their integrity and to be kind in a “mean-spirited town” as he bid farewell to the staff he led for barely a year.
Tillerson urged a few hundred employees gathered in the main lobby of the Harry S. Truman Building to show respect for each other and to undertake one act of kindness a day.
He drew sustained applause when he added: “This can be a very mean-spirited town. But you don’t have to choose to participate in that. Each of us get to choose the person we want to be, and the way we want to be treated, and the way we will treat others.”
Tillerson, 66, was fired by President Trump on March 13. He officially learned of his dismissal through a Trump tweet saying that CIA Director Mike Pompeo would be his replacement.
Tillerson had rebuffed suggestions he would resign amid a series of White House leaks over the previous months, apparently calculated to shame him into leaving, and lately had insisted he would be at the State Department through the end of the year, if not longer.
In his speech, Tillerson did not mention Trump by name but invoked the values of respect, integrity, honesty and accountability, all core attributes he cited at meet-and-greet gatherings with embassy employees around the world.
“Never lose sight of your most valuable asset, the most valuable asset you possess: your personal integrity,” Tillerson said. “Only you can relinquish it or allow it to be compromised. Once you’ve done so, it is very, very hard to regain it.”
“I hope you will continue to treat each other with respect,” he continued. “Regardless of the job title, the station in life or your role, everyone is important to the State Department. We’re all just human beings trying to do our part.”
Tillerson officially remains secretary of state until March 31, but he has turned over the day-to-day running of the agency to his deputy, John Sullivan. In a speech, Sullivan said Tillerson was returning to his ranch in Texas later in the day.
“His work for our country, leading the department, his voice for peace, for humanitarian assistance has been an inspiration for me,” Sullivan said. “And I was honored — have been honored to work for him, to have been selected by him to serve as deputy secretary of state.”
Source: Washington Post
--Advertisements--