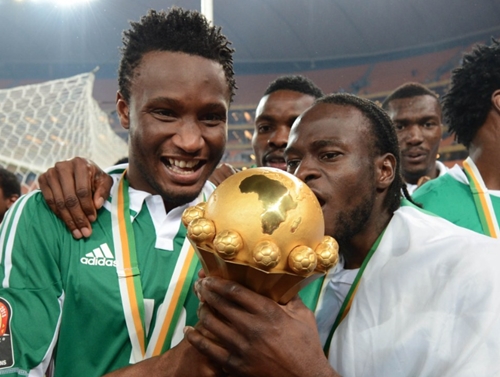 Mikel and Moses
Nigeria captain John Obi Mikel has urged his former team, Chelsea to play compatriot Victor Moses in a more attacking position.
Moses had enjoyed a major career revival at the Blues in the past two season, having been converted into a right wingback by manager Antonio Conte.
Earlier in his career, the Super Eagles flyer played as a striker and winger at Crystal Palace and Mikel believed Chelsea can get more out of the 27-year-old in attacking terms, much as the Nigerian national team do.
“Antonio Conte wants him to play as a right wingback but Victor has always played as a right winger,” Mikel told FIFA World Cup Russia Magazine.
“Victor is young, fast, he is quick, he is strong, he is powerful, he has everything.”
Moses was Nigeria’s key player on the road to Russia 2018, sctuneg three goals in four appearances, and manager Gernot Rohr has been impressed by the player’s impact.
“Victor Moses is a fantastic player, he made the difference against Cameroon when we beat the African champions 4-0, he was so fantastic,” said the German tactician.
“When I saw him the first time I immediately saw the talent, the qualities he had and we tried to bring it into the system, that he has to play defensively when he doesn’t have the ball and he did very well,” added Rohr.
--Advertisements--