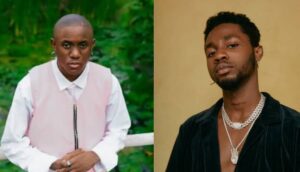 Nigerian afropop singer, Stanley Omah Didia aka Omay Lay has recalled the early stages of his relationship with colleague, Victony.

Recall that the duo recent went at loggerheads on social media after Omah Lay declared that he was the best songwriter and Victony laughed.

However, a viral video shows when they recently linked up after squashing the short-lived beef and reminiscing on fond memories.

Omah jokingly recalled how the ‘Holy Father’ hitmaker used to beg him for free beats when he was still a producer.

He said that Victony had confessed to him about not having money to pay for the instrumentals so he helped on some occasions.