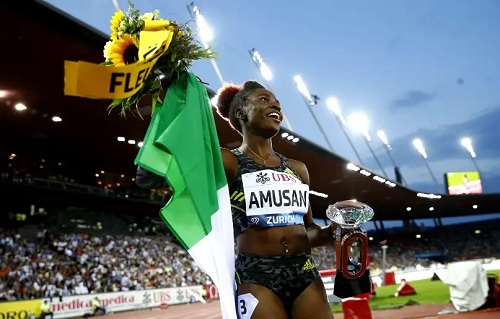 She did this on Thursday as she won the women’s 100 meters hurdles at the Diamond League final in Zurich.

The World and Commonwealth Games 100m hurdles champion and record holder finished in 12.29s in the race on Thursday, September 8.

The Nigerian had won the Diamond League trophy last year in 12.42 seconds.

Back in August, she won the gold medal in the women’s 100m hurdles at the 2022 Commonwealth Games (CWG) in Birmingham.

A month earlier, at the World Athletic Championship, Amusan broke the hurdles record in the semi-finals in 12.12s.

The 25-year-old also became the first Nigerian to win a gold medal at the championship with a spirited display in Eugene, Oregon.

Amusan is the first and only Nigerian to be crowned African, Commonwealth, and World champion in the same year.

Tobi Amusan has done it again. She won the women’s 100 meters hurdles at the Diamond League final in Zurich on Thursday, 8th September 2022 with a time of 12.29s. pic.twitter.com/V0FRsGwSWh