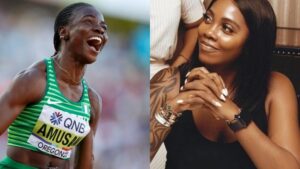 Tiwa Savage has joined millions of Nigerians celebrating Tobi Amusan on her victory.

On Monday, the 25th of July, Tobi Amusan won the women’s 100m hurdles gold at the World Athletics Championships in Eugene, Oregon. She also broke two records in one night, became the fastest runner to achieve this feat on 12.05 seconds.

Nigerians – Celebrities took to Twitter and Instagram to sing her praises. Kizz Daniel shared a video of her vibing to his song, BUGA, while Tiwa Savage decided to share a video of her face timing the world champion

In the video, Tiwa Savage thanked Tobi for making Nigerians- Women proud. She revealed that the news of Tobi’s victory gladden her heart and she’s so happy, that’s Tobi is being recognized for her hard-work.

Tiwa concluded by promising Tobi that she will give her anything she wants to show her support. In her words “God Bless You… I’m so happy Anything you need, any support you want, I’m with you 100%” .