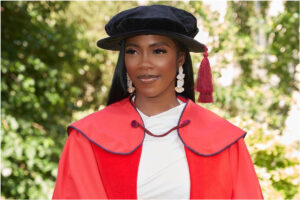 Popular singer Tiwatope Savage well known as Tiwa Savage bore it all when giving a speech after receiving an honorary award.

The singer was given an honorary award from her alma mater yesterday. Tiwa Savage was awarded a doctorate from the University of Kent in the United Kingdom.

Tiwa graduated from the University of Kent with a degree in business administration before being awarded a scholarship to study professional music at the Berklee College of Music in Boston, Massachusetts, in United States.

Giving her speech during the event, the singer spoke about her battles as a child when she moved to the States. She spoke about opened up about her difficulties as a new settler in the UK.

Speaking about her challenges as a child growing up and also an artist, Tiwa said:

“I failed at a lot of things actually.”

“I was bullied at school severely when I moved to the UK, I ran away from home a few times, I was suspended a few times from school.”

Speaking about the scandal she face due to her sex tape, the mother of one said:

“I’ve been globally ridiculed a couple of times, I’m not going to say what it is but it rhymes with ‘cape’. The irony.” I also failed Principles of Finance at this very university when I was graduating.”

Dr. Tiwa Savage Bares All, Opens Up On Scandal, Failure, Struggles As A Child pic.twitter.com/U6hyXGsOQr