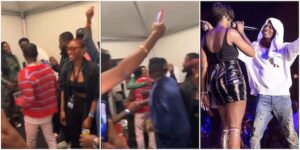 It appears Tiwa Savage and Wizkid are back to being friends again after going three separate ways for 4 good years when they ended their envied friendship.

Tiwa Savage and Wizkid were so close that most people felt they were dating but then they debunked that saying they were just friends but then with benefits and that means they were doing everything as friends without any strings feelings attached.

But unfortunately, that beautiful friendship that was envied by a lot of people suddenly ended and they both went their separate ways, today in a video sighted online, it appears they have reconciled as they were seen hanging out after performing in Germany.

Close friends who were with them while they were reconciling seem so excited that these two have come together once again based on how they were shouting when Wizkid was approaching Tiwa Savage and we all love seeing them back again.

In the recent video, Wizkid was spotted arriving backstage at his show in Germany and he was quick to approach Tiwa who was chilling at a different spot in the room.

Upon sighting Wizkid, both music stars threw arms around each other and were locked in a tight embrace for some time.

A post shared by The Tattle Room 🇳🇬 🌎 (@thetattleroomng)