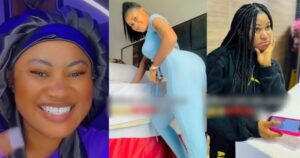 An anonymous Nigerian TikTok user by the name of Mimi supposedly passed away after her boyfriend abandoned her there and used her for rituals.

According to the story, Mimi fell ill unexpectedly and passed away in the hospital a few hours after being transferred there.

What transpired behind the scenes that led to Mimi’s death was disclosed by a close friend;

“Mimi’s [email protected] is a huge shock to us as she recently fell ill and was expected to recuperate in a few days.

She was rushed to the hospital by her boyfriend and we got hold of information
about his plan to use her for money r#tuals. So, we launched an SOS on WhatsApp for people to help but before they could get to the hospital, Mimi passed on.

At the hospital, Mimi’s boyfriend was nowhere to be found and they had to take her corpse to her village. However, we don’t even know the name of Mimi’s boyfriend as she kept him a secret almost every time we asked her about him.”