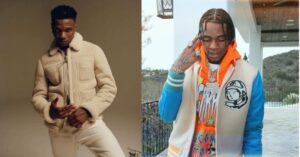 American rapper Soulja Boy has threatened the life of Wizkid for calling him wack 12yrs ago saying there will be consequences after he replied by dragging his innocent mother.

Wizkid who wasn’t a superstar as he is today 12yrs ago made a tweet calling American rapper Soulja Boy ‘Wack’ and he was silent over it until recently when he replied to that tweet saying it’s Wizkid’s mother who is ‘wack’.

A video sighted online sees Soulja Boy angrily ranting over the fact that Wizkid called him wack saying there will be a consequence for calling him that and he doesn’t care if it takes 30yrs, he will make sure he pays for calling him wack 12yrs ago.

Netizens reacting to the video made Soulja Boy understand that if anything happens to Wizkid, he will be held responsible whether he has a hand in it or not because this video is clear evidence of a threat to the life of the Afrobeat superstar, and it’s clearly coming from him.