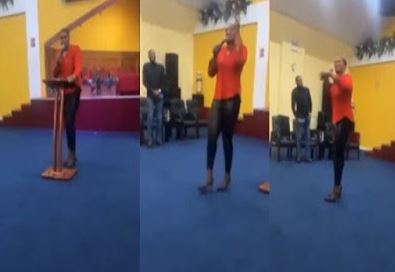 A video has surfaced online showing the moment a pastor’s wife cursed congregants for eating during her birthday celebration and leaving afterwards without contributing anything.

The video was first posted online by @ifeomatess on Twitter and it captures the moment the wife was heard cursing members for refusing to contribute money for her birthday.

According to her, some of the members came to her house to eat on her birthday without contributing anything.

Her blunt message and the way she went about the whole thing have stirred waves of reactions on social media and the conversation is getting interesting by the minute.

“Even on my birthday some of you refuse to contribute. May God punish you. Because you are wicked unless you don’t have”

”it’s not like the money is for me, it’s for the food you are coming to eat. Some of you eat like a pig and also carry takeaway” the pastor said.

Pastor's wife cursing Church members because they did not contribute money for her birthday.??? https://t.co/Jloxhn4gBb pic.twitter.com/xUKpISHf5r