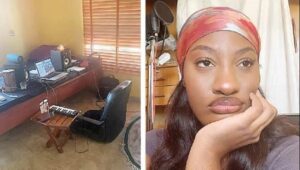 Nigerian singer, Temilade Opaniyi, who is popularly called Tems, has remembered her days of small beginnings.

The singer recently took to her Twitter page to share images of the makeshift studio-cum-bedroom where her album, For Broken Ears, was produced

The singer, who recently bagged the BET Award for Best International Act, added the caption, “Trenches is a real place. Where I made For Broken Ears’.”

Trenches is a real place. pic.twitter.com/9IkSfydaAb

The album, which was Tems’ debut, was released after the positive reactions that greeted the release of her song, Try Me, which she also produced.

Expectedly, the picture of the studio generated a lot of reaction from fans.

Daniel Regha wrote, “There is nothing wrong with living in the trenches if it is comfortable or your source of inspiration. A lot of people staying in trenches are doing better than many residing in GRA. Mind you, some low-key elites stay in the trenches, and Nigeria is literally a hellhole, regardless of where one lives.”

Sike Ifeanyi said, “That is the good thing about starting small with a vision and dream.”

Clinton Batholo2 wrote, “Tems, that’s a MacBook and a window blind in your alleged trench, still properly ventilated. You don’t need to appeal to any section of your fans as (being) poor or (having) humble beginnings. Enjoy your stardom, dear.”