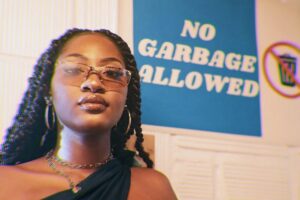 Raving Nigerian female vocalist, Temilade Openiyi, known professionally as Tems has opened up on how she producer her trending tune, ‘Ice T’.

The multifaceted singer, songwriter and producer has taken us through the her life as a music producer. The 2022 BET Awards Best Intenrtal Act winner, Tems gave a breakdown of how ‘Ice T’ was made.

The multiple award winning musician also produces some of her songs, a skill most fans do not know and one of her self-produced record is ‘Ice T’, a beautifully crafted single off her 2020 Extended Play; ‘For Broken Ears’.

In a short vide shared on social media, the sensational songstress gave a detailed explanation of the production process and it is exciting to watch. Tems also revealed that, her upcoming studio album will be packed with self produced songs.

Following her success at the 2022 BET Awards where she won Best International Act and Best Collaboration of the year with Wizkid’s ‘Essence’, Tems on Friday, July 1, 2022 received another international award from Nordoff Robbins Music Therapy.