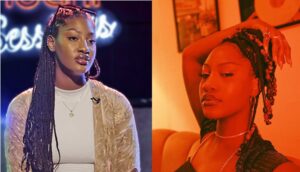 This year has clearly been the best for the ‘Try Me’ crooner as she can now brag about being one of the only two Nigerian aryistes to have the most charting songs on Billboard Hot 100.

The other artiste who had broken the record was Wizkid, so Tems’ new music milestone means that she has equalled Wizkid’s record.

She was able to attain the feat thanks to the entry of Beyonce’s Move unto the Billboard charts.

Tems was featured on the song, and it happens to be the third track makes which the Nigerians songstress is credited on to hit the popular charts.

Other songs on which Tems is featured that have hit this mark include Wizkid’s Essence as well as Future’s Wait 4 U.