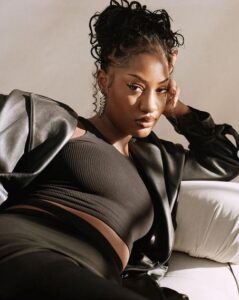 In the recent trailer released for “Black Panther: Wakanda Forever”, Tems covers Bob Marley’s “No Woman, No Cry” on the trailer’s soundtrack.

Marvel Studios debuted the trailer for the blockbuster sequel, which is scheduled for a November 11 release at San Diego Comic-Con on Saturday.

The teaser begins with Tems’ rendition of “No Woman, No Cry” before it seamlessly transitions to Kendrick Lamar’s resilient song, Alright (2015).

During an interview with Billboard, Tems was asked what song she would remix if given the opportunity.

To which she responded, “I would choose Bob Marley’s “Is This Love, or No Woman Don’t Cry” because those are one of my favourites,” the 27-year-old responded.

Tems performs an extremely sombre cover of Marley’s song in the two-minute teaser, containing the phrase “good friends we have, and good friends we’ve lost.”

The poignant trailer hints at how the MCU franchise’s heroes will handle the loss of T’Challa, formerly portrayed by Chadwick Boseman, who passed away at age 43 in 2020 following a four-year fight with cancer.