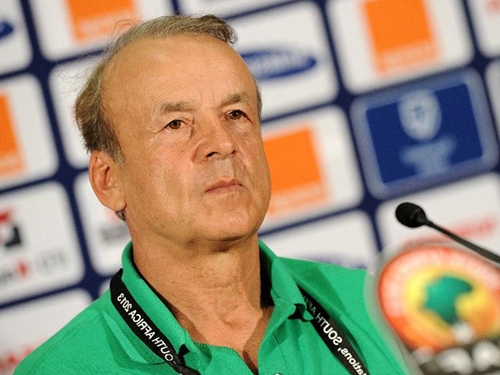 Super Eagles coach, Gernot Rohr and goalkeeper, Ikechukwu Ezenwa say the form of Argentina superstar, Lionel Messi is not giving them worries ahead of the Russia 2018 World Cup.
--Advertisements--

The Eagles are in Group D alongside Argentina, Iceland and Croatia at the Mundial and would clash against their South American foes in their final group game in Saint Petersburg on June 26.

Both sides have met at the World Cup four times with the more illustrious South Americans triumphing on all occasions.

Messi has been in terrific form in La Liga helping Barcelona claim top spot with 72 points in 28 matches, eight points above second-place Atletico Madrid and 15 points above champions and bitter rivals Real Madrid.

In separate interviews, Rohr and Ezenwa said they were not shaken by the dazzling displays of the five-time Ballon d’Or winner, who was excused from La Albiceleste’s friendly 4-2 defeat to the three-time African champions in Krasnodar, Russia, last November.

“We know he’s (Messi) one of the best players in the world but we are not worried about anybody because we have a good team. The game against Argentina will be a tough one and it will be very interesting going into the group’s last games,”Rohr told The PUNCH.

Enyimba keeper and Eagles current first choice, Ezenwa also reiterated his coach’s view when asked if he could stop the sleek Argentine.

Ezenwa copped an injury in January at the 2018 CHAN but despite initial fears that he might be sidelined from the trip to Russia, he’s back and hoping to stop Messi if he gets the nod to man the posts at the Mundial.
Asked if he could stop the Argentine from sctuneg, Ezenwa replied curtly with a smile,“Yes, I can stop Messi.”

“We play as a team always and collectively we have been doing well. That’s the mentality we are taking to the World Cup. If I get chosen by the coach, I will do my best always to stop any player from sctuneg,”Ezenwa said.