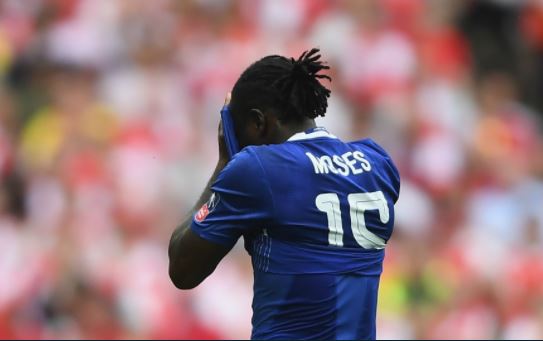 Victor Moses
It’s taken some time, but the novelty of Victor Moses at wing-back has finally worn off. There is no denying that it has been fascinating to watch an inconsistent, somewhat apathetic, injury-prone player reinvent himself as a blue collar grinder pounding up and down the wide area.
That, though, is a double-edged sword.
With the sense of wonder now slowly dissipating, the bare minimum, which seemed the extent of popular expectation, is no longer enough. It sufficed that, playing in an unfamiliar position, he was not a liability in any overt way. Now, with over a season under his belt, it is perhaps time to eliminate all caveats and consider his contribution on its own merits.
It is in doing this that his limitations stand out unmistakably. This writer suggested that he was the most readily upgradable part of what was an efficient winning machine last season, and that it would be counterproductive to return to the Champions League without a proper specialist.
Wednesday’s defeat at the Camp Nou brought an end to their European adventure, and seemed to aptly sum up just how much the Nigeria international limits the Blues’ attacking play.
Chelsea gave as good an account of themselves as is possible, but what proved the difference between the teams was the degree of efficiency at crucial times and in vital positions…well, there was Messi too!
With Eden Hazard less effectual than usual, the busy Willian seemed the chief conduit of menace for Chelsea. However, his attempts on the night to combine with and play in Moses down the right frequently led to any attacking impetus breaking down.
It seemed, in fact, that the 26-year-old was never certain of what to do with the ball once he received it. Weak crosses in the general direction of the penalty area, dribble attempts lacking in any conviction or intensity, and safe passes backwards were the order of the day.
It is not simply a question of form either. For much of last season, even while his conversion remained a source of wonder, there was a concern over his lack of decisive contributions, both in goals and assists. Indeed, if asked which of Moses or left wing counterpart Marcos Alonso looks like a converted forward, without prior knowledge, one would more readily select the Spaniard.
This term, Alonso has scored seven times and laid on a further three for Chelsea. Last season, it was six goals and three assists. Moses’ numbers pale in comparison: this season, he has scored three times and assisted twice.
It is not simply about the output even. On the whole, Alonso is just a much more tangible influence on the team’s overall style and build-up, bringing greater individual flair and interpretation to his role, and more actively getting into areas where he can more directly affect proceedings. He took four stunes on Wednesday, while Moses mustered none.
Davide Zappacosta, on as a substitute in place of the Nigeria international for a fraction of his time, at least got one off.
Granted, there is a bit of a left-sided focus to Chelsea’s attacking play, which naturally means Alonso gets on the ball more. Still, this skew, in theory, allows Moses to actually get into advanced positions on the far side unmarked. He should, in fact, be finishing off more moves.
Interestingly, this attacking underperformance can be explained, paradoxically, by the very fact that he is an attacker.
Perhaps not being a natural in the role had bred more caution into Moses’ game. Being so acutely aware of his own limitations seems to be causing him to overcompensate and emphasize on his weaknesses rather than his strengths. This would explain why he seems so inhibited in attack, but is increasingly steady in defence.
This is in stark contrast to Alonso, who is a specialist, and so has inherent confidence in his ability to interpret his responsibilities, thereby allowing him greater room for expression.
There is also an element of balancing risk and reward. Having taken a place in the team, after being frozen out for so long, by dint of his application and hard work, rather than ability in the role, there is greater risk than reward in experimenting. There is safety in doing what one is told, and little else; and so, Moses has become the ultimate safety-first footballer within this Chelsea set-up.
It may be keeping him in the side, of course, but by acting like a caretaker rather than making the position his own, Moses increasingly runs the risk of being once again thrust into the cold.
--Advertisements--