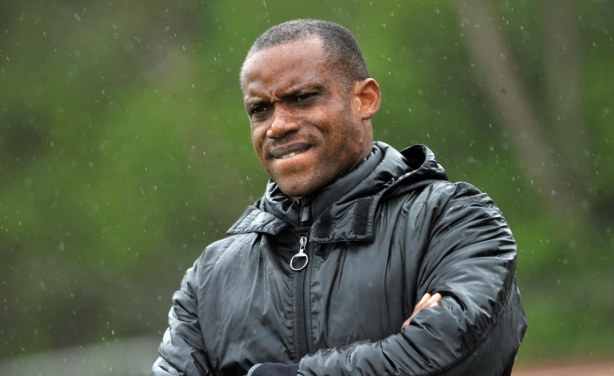 Sunday Oliseh
Former Super Eagles captain, Sunday Oliseh has won a legal battle against his former club, Club Fortuna Sittard after the Royal Dutch Football Association (KNVB) tribunal found the second division guilty of ‘black money payment’.
The club has been ordered to pay their suspended Nigerian coach Sunday Oliseh part of his salary as compensation.
‘Black money payment’ is an illegal payment for a job done in which tax is not paid to the government and it is punishable in the Netherlands.
Reports in Dutch outlets confirmed the KNVB verdict and added that the tribunal also ruled that Oliseh is obliged to return to his post as Fortuna Sittard’s manager till the end of May.
“I’m delighted at the ruling and the most important thing for me in the judgment was that it was stated that they did not find anywhere that I was a bad employee,” Oliseh said shortly after he left the tribunal.
“The judgment came like an hour ago; it’s a 20-page judgment. My assistant coaches will also be compensated.
“The Federation gave the President of Fortuna Sittard (Isitan Gun) one week to pay me the compensation or to withdraw the request to terminate my contract. If he does withdraw it means he will pay more that the stipulated compensation fee.”
Oliseh however did not reveal the amount he will be compensated with.
Meanwhile, It was also reliably gathered that Oliseh will sue the President of Fortuna Sittard for damages in the coming weeks.
The former Super Eagles captain and captain also took to Twitter to share the good news.
“Dutch court finds Fortuna Sittard guilty for not being a good employer to Sunday Oliseh and sanctions Fortuna. Most importantly The Knvb Court stated that Oliseh has not acted as a bad employee!” Oliseh wrote on Twitter.
“Consequentially, negating false claims made by Fortuna. God is great!
“The court further sanctions Fortuna Sittard to compensate me (Oliseh) financially immediately.
“I am obliged to stay as a Fortuna employee till the month of May 2018.Thanks 2 all my well wishers for your valued support all through this injustice. Thankful to God 4 his blessings!”
--Advertisements--