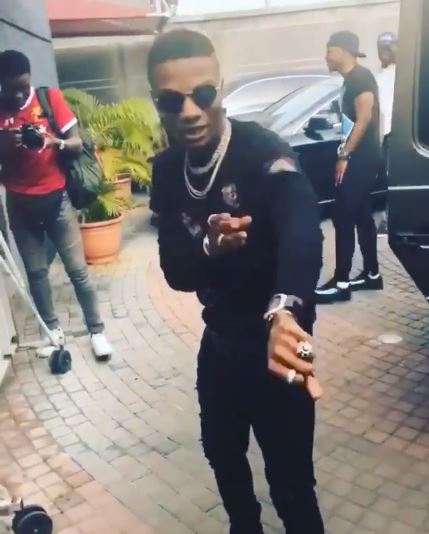 Wizkid shows off his watch
Without a shadow of doubt, being a music star brings a lot of goodies with it. Superstars around the world are seen often living larger than life and super comfortable lifestyles, while also traveling around the world.
They are also known to wear the most expensive clothes and jewelry to make a statement to whoever cares, that they are "living the life."
Wizkid is not an exception to this rule. The "Manya" crooner who is considered to be one of the most successful singers from Nigeria, was caught on camera showing his expensive designer wears recently.
The Video was reportedly stune at the venue of Banky W’s birthday party yesterday. The "Starboy" who was dressed in all black, took some time to speak directly to the camera and show off just how expensive he lives.
He began by saying "Quick, quick swag check…" before he continued talking about his clothes and jewelry.
Watch the Video below: