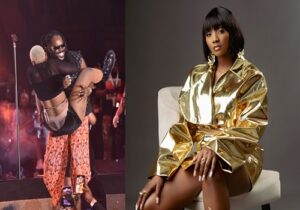 Simi, popular singer and wife of musician, Adekunle Gold has broken her silence after a dancer jumped on her husband on stage.

The incident happened in Kampala, Uganda.

It attracted tens of revellers filling up the Cricket Oval, one of the biggest concert venues in the country.

However, while Adekunle Gold was performing on stage, a Ugandan girl jumped on him but he struggled against holding her which made her fall.

Reacting to the incident, Simi took to the comment section of her husband who had shared a shirtless post, rebuking him to go put on his shirt.

The “Duduke” crooner said the lady’s action was down to him baring his chest.

“Dass why they’re jumping on you. Lo wo shirt e my fren,” Simi wrote.

Responding, AG Baby laughed at his wife’s rebuke and assertion.