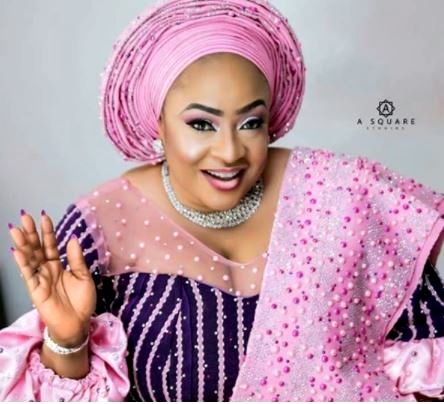 Actress Funke Daramola
Popular Nollywood actress, Foluke Daramola, has taken to her Instagram page to advise her singles fans concerning picking a lifetime partner.
The actress narrated how a CAC pastor was misled by his church elders to marry a woman who ended up as a thorn in his flesh.
In an Instagram post, Foluke Daramola advised singles not to rely on a pastor’s recommendation before settling with a partner.
Here’s her post in full below;
****************
”CHOICE OF WIFE/HUSBAND THE SAD EXPERIENCE OF GREAT APOSTLE AYO BABALOLA.
“His known mistake was his choice of wife. History has it that the woman he truly loved was a single mother, but the elders of CAC considered it an embarrassment for their leader to marry a single mother. Hence, they misled him to marry the spinster who later became the thorn in his flesh. Her name was Dorcas. A Christian name is not the same with a Christian at heart.
“There was a time she poured palm oil on the white garment of the man of God on his way to a crusade ground. Another time after returning from the mountain after long days of prayers and fasting, the wife served him a delicious meal to break his fast.
He had only taken about two or three morsels when the wife told him “l thought you are a true prophet, because you should have known by revelation that the chicken in the food was stolen”. The man of God gently left the remaining food and returned to the mountain to ask God for forgiveness.
“As anointed as he was, he had no adequate menttuneg, part reason for his wrong choice of wife which sadly and eventually, directly or indirectly led to his untimely death.”
APPLICATION: If you want to fulfill purpose and live long, you must by all means, at all cost marry YOUR Wife/Husband Not the one a prophet, pastor, priest or parents recommend, but the one God recommends. People can only guide. The ultimate choice must be born out of your personal conviction by the Holy Spirit.
#Pray….May we not marry our enemies as spouse in Jesus name!!! Anyone man or woman sent as a spouse to destroy my destiny be exposed and disgrace in Jesus name!!!”.
--Advertisements--