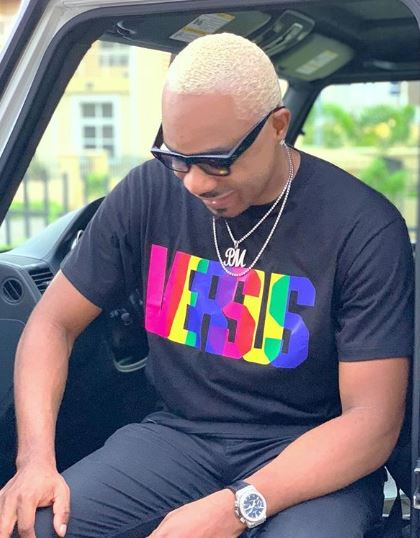 Pretty Mike
Controversial Lagos socialite, Pretty Mike, has come for short women in his new Instagram post.
He believes women that are brief are hard to satisfy in bed and they could be very problematic to deal with.
His note seem to have irked women of that height as they have been picking holes in what he wrote.
"Short Girls and there wahala-: They are the EvE among our midst,
These are women 5.3ft and below. A short petite woman might still be considered cute and mistaken for a 12yrs old,but a short thick lady with huge bumbum are the worst .
The shorter they are the closer they are to the devil, that’s is why it’s easier for him to whisper words into their ears.
In history,vfemale with the worst atrocities are mostly short women… They are the fighters,with the sharpest of tongue ..especially those with a short and small frame, it’s like they swallowed a microphone as they have the loudest of voice and they are very quick to use it .
A short woman is never satisfied in bed ..they have a s*x drive with that of a horse,especially those in relationships.. If there is ever a female arm robber ..it will be a short woman,they have the balls for it…
They are mean,evil and they don’t play. They are extremely strong and have the tendency to beat their husband and if they can’t beat,they use poison as an alternative… A short woman would still marry a short man and end up being the man of the house while producing mustard seed children….
If you cheat on a short thick woman be very sure she is going to revenge by sleeping with all ur family and friends as a short woman never forgives…. Please do not invite me for a wedding if both the bride and the groom fall under the category of short syndrome, that’s is wicked and unfair for the next generation of children who will be called kekere all their lives… .
We where all created in God’s image with the exception of short women….#TagDem"

Terry Apala caught in bed with ‘cousin’ by Pregnant girlfriend