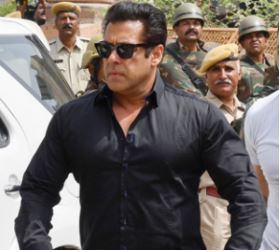 Salman Khan
Salman Khan, a popular Bollywood superstar has been sent to jail, Vanguard reports.
He was jailed for five years by an Indian court on Thursday for killing endangered animals on a hunting trip.
Prosecution lawyer Mahipal Bishnoi told reporters outside the court in the Rajasthan city of Jodhpur:
“The court has given a five-year jail term and fined Salman Khan 10,000 rupees ($150).”
The lawyer said an arrest warrant was being prepared for the 52-year-old actor who would be sent to Jodhpur central jail. Khan, who pleaded not guilty, can still appeal.
--Advertisements--