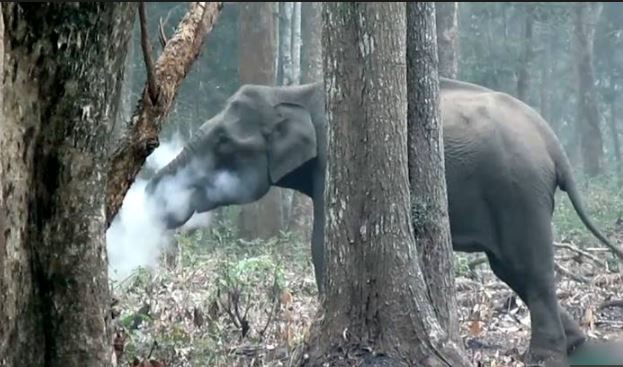 The "smoking" elephant
The footage of an Asian elephant “smoking” in a forest in southern India has baffled wildlife experts, who say the behaviour has never before been observed.
According to a report by The Guardian, Vinay Kumar, a scientist with the Wildlife Conservation Society’s (WCS) India programme, captured the puffing pachyderm while visiting camera traps in the Nagarahole national park in Karnataka state.
The 48-second Video shows the elephant picking up something with its trunk and putting it in its mouth, then blowing out a gust of smoke.
Biologists from the WCS said the footage, stune in April 2016 but only recently posted online, was “the first known Video documentation of a wild elephant exhibiting such behaviour, and has scientists and experts puzzled”.
He said charcoal had toxin-binding properties that could have medicinal value for the animals. Charcoal is also a laxative and is plentiful in forests after wildfires, lightning strikes or controlled burns.
Though elephants have not previously been observed blowing ash, animal self-medication – zoopharmacognosy – is relatively common, according to  website.
It cites studies that observed red colobus monkeys in Zanzibar eating charcoal to counteract toxic substances in their food. Another survey found bonobos swallow leaves with rough surfaces to scour parasites from their systems.
Red and green macaws have been known to eat clay to kill bacteria in their systems, and pregnant elephants in Kenya are believed to eat leaves that may speed up the delivery process.
India is home to more than 27,000 Asian elephants that make up about 60% of the global population, according to a 2017 census.
The number was 10% down on the 2012 census, but the government has attributed the drop to more accurate counting methods.
Watch the Video below:
--Advertisements--