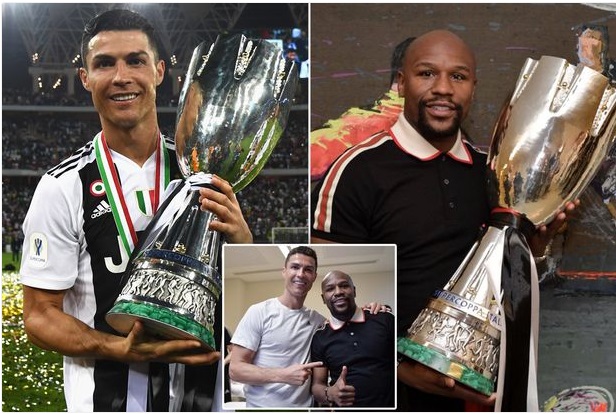 Ronaldo celebrates with Mayweather
Cristiano Ronaldo and his Juventus teammates celebrated their Italian Super Cup success with Floyd Mayweather after their 1-0 defeat of AC Milan. Portugal superstar Ronaldo scored the only goal of the game in Jeddah, Saudi Arabia – where the match had controversially been staged.
Ronaldo pounced just before the hour mark, heading home Miralem Pjanic’s dinked cross to give the Bianconeri their first trophy of the season.
It was also the Italian champions’ first success in the competition since 2015, having lost the two previous Suppercoppa finals.
Ronaldo and his Juve teammates were congratulated in the dressing room by unbeaten boxing star Mayweather.
Speaking post-game, Ronaldo told Rai Sport: “It was a very difficult match, it’s very warm and hard to play in these conditions.

“It was my intention to start 2019 with a trophy, I have my first title with Juve and I am very happy.
“But it is only the start, we will take it one step at a time. We’ve got this trophy, now we must keep working hard to achieve the next one.”
Juve currently sit nine points clear of second place Napoli in Serie A, having gone unbeaten in the first half of the season.
They are also Champions League contenders and are set to face Atletico Madrid in the second round, as they bid to end their 23-year wait for the European Cup.