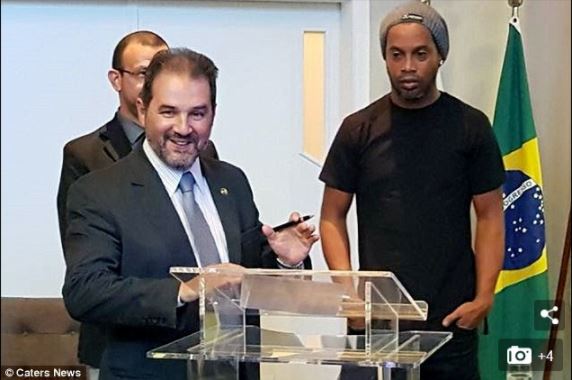 Ronaldinho (Right) being presented to the public
Legendary Brazil forward Ronaldinho is to run for parliament in his homeland. The former Barcelona and AC Milan star has submitted his candidacy to stand for office having first signalled his intent last year.
Ronaldinho will run for either the Senate or a position in the Chamber of Deputies in the general election this October.
He will be running for the Brazil Rebublican Party (PRB) and documents approving the 38-year-old’s candidacy were signed in Brasilia before party members.
During the ceremony Ronaldinho said: ‘I am happy to be able to participate in a project aimed at improving our country and bringing modernity, joy and health to the entire population.’
PRB President, Senator Eduardo Lopes welcomed Ronaldinho by saying: ‘This a historic moment like so many other moments in Ronaldinho’s life. ‘He gave Brazil his talent and ability and now with his wonderful life story he will contribute to (the country through) .
--Advertisements--