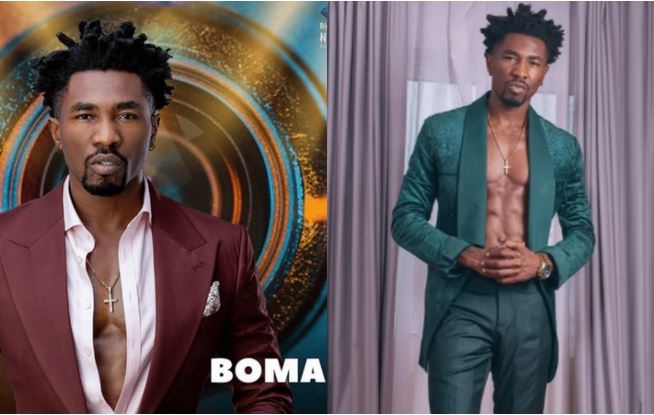 It has been revealed that Boma, one of the Big Brother Naija, BBNaija housemates, is actually a Hollywood actor and has starred in ‘Blacklist’, popular tv series.

The ‘Shina Ya Eye’ BBNaija housemate had yesterday told his fellow housemates that he has acted in Hollywood with some celebrities and also in Nollywood.

However, it came as a surprise to fans that the housemate was among the cast of episode 16, season 6 of popular American tv series ‘Blacklist!’
He confirmed this to housemates on Saturday night while giving a brief introduction about himself.

This may have just earned him the viewers’ votes and a major contender in the show as his acting career caught the interest of Nigerians. This new revelation has also stirred reactions from Nigerians who think this will earn him an automatic spot in Nollywood after the show.
Boma is also the only BBNaija Season 6 housemate to be verified on Instagram with about 200k plus followers.

@AlhajiEgoOyinbo “You all know Boma is from Hollywood right? He has every reason to be proud.”

@TheGlory01 “Boma has gotten a straight golden ticket into Nollywood what with all his Hollywood credentials.Impressive.”

@Dammiedammie35 “Boma is inside blacklist ? Like Raymond Reddington’s blacklist ? Omohhhh this guy is fire.”

@Omojuwa “Win or not, Boma is going to be one of the stars from this graduating year of BBNaija.”

@Chrisoff_71 “Boma is definitely bringing a lot into the industry, expect more from a non resilience dude with loads of talents.”

@Ormainy “Boma is now saying all the things some of you say he is lying about o! He never played the poverty card. He has mentioned the New York Film Academy and movies in Hollywood. Let’s try not to judge these people too fast. Give them benefit of doubt.”
@Megxo_official “Person wey be star already, he just come waste slot.”

@Kakatshozi_ “Boma is in The Blacklist, a whole Hollywood star.”

@SonofAbe “Boma (almost all the whole celebs in NAIJA are hyping him lol, he has past work experience) he even has some Hollywood tractions , nigga has a f*cking Imdb profile and he is signed to SAG-Aftra Union.Only filmmakers can understand.”

@NkiruNjoku “This is why I hate our brand of humility. See this Boma fellow now. “I’m humbled to be nyen nyen nyen” See him levels! Hollywood and things.”

@Maiaoma “Boma is actually the most accomplished. He’s been on an American TV show, Wow he’s possibly going to last until the final week top 5.”

@MajZlatan “Guy is already a star by just introducing himself. Many people never knew he was in one of the Black list seasons and also verified on Instagram.”