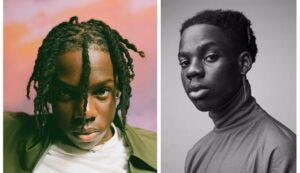 Raving Nigerian recording and performing artiste, Divine Ikubor, better known by his stage name Rema is having a good run with his output, ‘Calm Down’.

On Friday, 11th February, 2022, the naturally talented singer, songwriter and Mavin Records superstar blessed the screens with a colorful and an eye pleasing viuals to his smash hit single, ‘Calm Down’.

‘Calm Down’ happens to be the 4th song off his sixteen tracked star-studded studio album captioned; ‘Rave & Roses’. The album had guest appearance from top acts like 6Lack, Chris Brown, AJ Tracey and Yseult.

‘Rave & Roses’ album has amassed impressive numbers on streaming platforms. Well, the official music video for ‘Calm Down’ which was released on Friday, February 11, 2022 has surpassed 100 million views on video sharing and social media platform, YouTube. 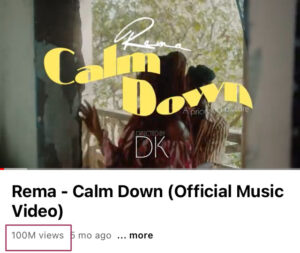 This is coming after Rema took to his social media pages to announce an upcoming tour in the United Kingdom. Captioned ‘Rave & Roses Tour’, the event will see the singer perform in 4 cities in 4 days.

The ‘Rave & Roses’ UK tour starts after his ‘Rave & Roses’ tour in Australia. The UK tour will see the young sensational singer and entertainer perform in Brixton, Birmingham, Manchester and Bristol