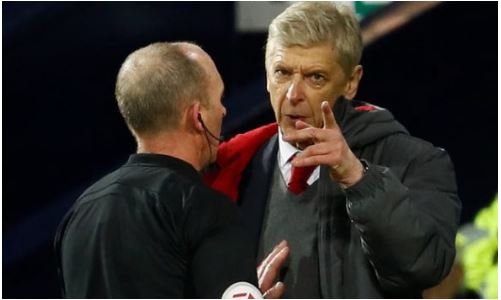 Mike Dean and Arsene Wenger
Referees’ chief, Mike Riley, has revealed that Mike Dean has admitted his decision to award West Brom an 89th-minute penalty in their 1-1 draw with Arsenal on December 31, was “wrong”.
Dean gave the penalty for handball against Arsenal’s Calum Chambers and Jay Rodriguez equalized from the spot.
Riley says it would have been overturned by Video Assistant Referee (VAR) technology.
“I know Mike would have overturned it.
“He messages people, and he’s a very honest guy, and he goes, ‘I got it wrong’. He knows he did,” Riley said, quoted by the Daily Express.
Kieran Gibbs’ cross hit the wrist of Chambers at close range, while the defender’s arm was in front of his chest.
“You award the penalty because what you have seen on the pitch is the arm coming towards the ball.
“But immediately there is evidence from another camera angle which shows actually the opposite happened. That is the safety net of the VAR.
“I think Chambers would have been overturned. The question you ask is, is it an act of deliberate handball? And the reverse angle shows him trying to bring his arm out of the way of the ball, rather than the reverse,” Riley added.
Arsenal manager, Arsene Wenger, is currently serving a three-match ban for his protests. The Frenchman was also fined £40,000. VAR will be used in the Carabao Cup final next month and both legs of the Chelsea v Arsenal semi-final.
--Advertisements--