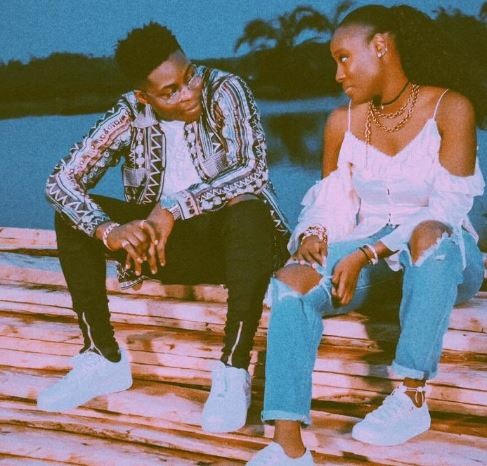 Reekado and Tolani
Reekado Banks and Tolani Otedola, Femi Otedola’s eldest daughter, have left social media users wagging their tongues after their ‘loved up’ photos emerged online.
It is alleged that it may be another stunt or simply behind the scene photos from their recent video shoot. However, Twitter users believe that there might be more to the recently released photos of Reekado Banks and Tolani Otedola.
Nigerians are however, having a field day analysing their ‘relationship’.
See all the hilarious reactions below:
The last Otedola that remained, Reekado Banks has gone to carry her ??? dear Otedola daughters admirers and dreamers, there’s no hope for us ? we will have to fight for what’s ours! ???????
— W – ADEFISAYO?? ? (@qudussino) January 4, 2019
@EtniesJags wrote:
Reekado Banks has moved to Otedola’s 3rd daughter It’s officially secure the bag SZN
@Abuja_empire wrote:
ReekadoBanks: My papa no be Dangote or Adeleke… but we go de Tolani Otedola: Say no more. Otedola with the money ooooo ReekadoBanks with the sense
@Osascruz wrote:
You guys should calm down!! Tolani otedola and Reekado Banks are not dating, it’s a song they’re dropping.
@Thosyn_ wrote:
Asa Asika(Cuppy), Mr Eazi(Temi) , and Reekado Banks(Tolani) out there making money moves “Otedola” . What is wrong with my head sef? Anybody with digger over there? Make I start to dey dig-hunt
See more reactions below:

Let me go and rerun the paynt I stole. They’ve stolen the girl I want to impress 😭😭😭😭 pic.twitter.com/atCN0SztOV

This one that it looks like Tolani Otedola And Reekado Banks are dating, please who is buying assurance for who🙄
Because Valentine’s Day is almost here o😂 pic.twitter.com/pyiPRg4rJC

Tolani otedola And Reekado Banks are now looking at each other somehow.

I’m not saying anything oh, but if it smells and looks like love. Then it’s porbaly love pic.twitter.com/o7hytu0XVU

How I wish this Tolani Otedola girl was dating someone like Kizz Daniel. But Reekado Banks is not bad, as long as she’s not dating that Social Media Lucky Dube, no problem pic.twitter.com/MUDeOGLUi3