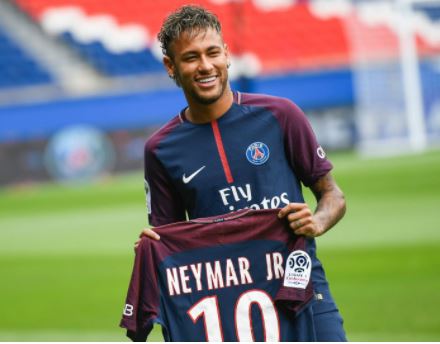 Neymar Jr
Real Madrid have turned their attentions towards signing Neymar from Paris Saint-Germain, according to Marca.
Los Blancos feel that they need an injection of Galactico quality in their squad and are eyeing their first superstar signing since James Rodriguez arrived in 2014.
They do not believe that it is a move possible, however, before the summer of 2019, by which time they may be prepared to use Cristiano Ronaldo as a makeweight in any deal.
Leicester winger Riyad Mahrez has opened talks with Liverpool over a potential January move to Anfield, the Express reports.
The Reds are looking to bolster their ranks after losing Philippe Coutinho to Barcelona and see the Algeria international as a suitable option.
It is claimed that Mahrez is open to the idea of playing under Jurgen Klopp although would prefer a move to Arsenal, with whom there has been no contact thus far.
Everton manager Sam Allardyce has confirmed that the club would like to sign Arsenal winger Theo Walcott this month.
"You’re all aware of our interest in Theo," Allardyce told a news conference. "If we’re able to get that over the line, I’ll be delighted."
Manchester United are targeting Jamie Vardy and Javier ‘Chicharito’ Hernandez in addition to Alexis Sanchez, the Telegraph reports.
Vardy reportedly would be the most expensive option as the Red Devils look to bolster their attack, with Leicester City seeking a £35 million fee.
Hernandez, meanwhile, could return to Old Trafford if West Ham can recoup the £17m they spent to sign the Mexican striker last summer.
--Advertisements--