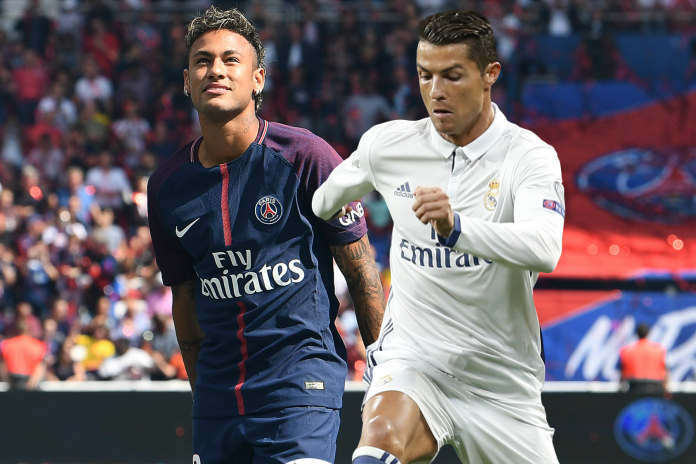 Reigning Spanish and European League champions Real Madrid are reportedly interested in bringing Brazilian star Neymar back to the Spanish La Liga in the summer.

Neymar left Real Madrid’s bitter rivals Barcelona last August for a world record move to Paris-Saint-Germain, and according to UK Sun, Los Blancos’ chiefs want him at the Bernabeu.

The report stated that Real Madrid president Florentino Perez is ready to offer Cristiano Ronaldo plus cash in a bid to sign Neymar to the club.

Real Madrid offer PSG Ronaldo plus cash for Neymar (ptuneo: Sun)
Before Neymar completed his move to PSG, it was stated that Perez was interested in signing him, and he will be making a mega offer after the 2018 World Cup in Russia.

This season, Real Madrid who are the reigning Spanish champions are struggling in the La Liga as they presently occupy fourth position on the table with 32 points, and Los Blancos are 19 points behind leaders Barcelona.

Earlier, AMonpointTV had reported how Villarreal pulled off what can be tagged as miracle as they scored a late goal to condemn Real Madrid to a home defeat in La Liga on Saturday, January 13.

Pablo Fornals scored late in the game to cap off a smart counter-attacking move to secure the three points.

It was another poor outing from Los Blancos as their defeat surely ends any of hope of successfully defending their La Liga crown.