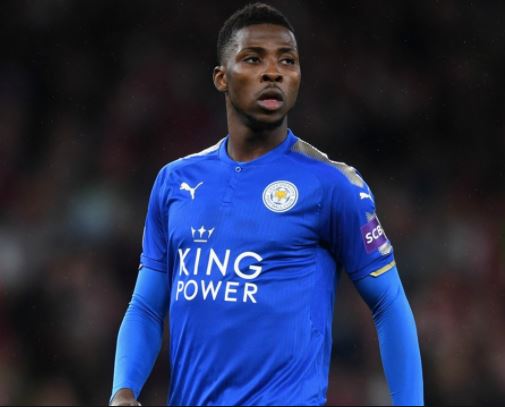 Kelechi Iheanacho
Claude Puel has confirmed striker Kelechi Iheanacho will not  be leaving Leicester City in the January transfer window, Leicester Mercury reports.
The 20-year-old  Super Eagles forward  has been the subject of speculation that the Foxes were ready to let him go just months after he moved to the King Power Stadium from Man City in a £25m move.
But Puel said Iheanacho is a player that they  still think has great potential. Iheanacho has struggled to make an impact since his arrival, due mainly to the form and fitness of Jamie Vardy this season.
However, when Vardy was injured recently Islam Slimani was preferred ahead of Iheanacho to lead the attack, but Puel believes Iheanacho will improve. Nigeria coach Gernot Rohr has stated he believes both Iheanacho and Ahmed Musa need to find new clubs in January, but Puel said Iheanacho is going nowhere.
“Iheanacho is a young player,” he said. “He signed this season with us and we have to develop him. I hope he can have more game time in the second half of the season.
“We don’t know about what the national trainer said. We will see.
“We have discussions with different players. For example, Iheanacho is a young player, arrived this season and he will stay with us.”
Puel was less committal over the future of Islam Slimani, who has also been the subject of speculation that he could be moved on if City receive a good enough offer.
“It is a good try but I can’t give all the details of individual players to you,” Puel said when asked about Slimani’s future.
“Yes, I talk about Iheanacho because there has been a lot of speculation. He is a young player who arrives in a good team where there is competition and he needs to keep working and improve. He needs time to improve and work.
“I cannot talk about details about players. It is important to have a good balance in the team and have a good game time for the players.”
“We will see. Some players want and need some playing time. It is important to get the right balance for the squad, and give players good game time.
“It is a question of respect and keeping them with a good attitude. That is important for Leicester.”
--Advertisements--