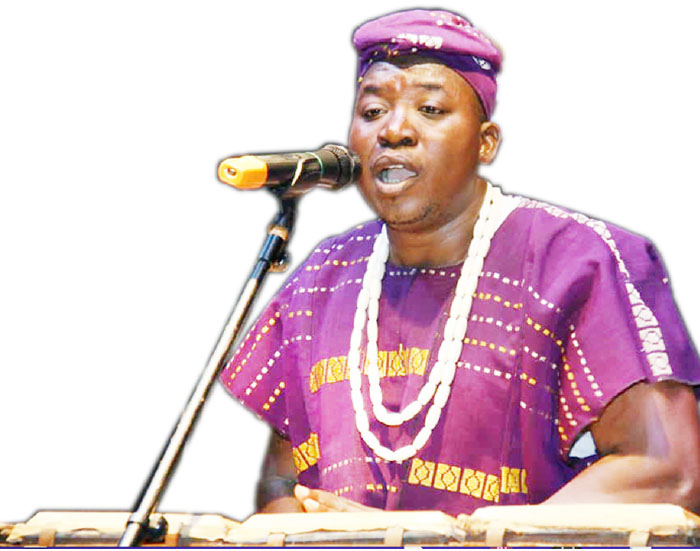 Wura Samba
Abiodun Abraham Oke aka Wura Samba is known for his use of traditional percussion instruments in a modern way.
Versatile, talented and experienced, Oke plays his instruments with lots of passion and dexterity. In this chat, the artiste opens up on growing up, music, challenges and the future of jazz in Nigeria, among other interesting issues.
Tell us about growing up
I was born in Lagos into a family of six. I was the third child and first son. I was born in the Mushin area of Lagos to be precise. I was not born with a silver spoon but we were not poor either.
At what point did you discover that you wanted to be a musician?
I discovered myself when I was very much younger. I was born into a white garment church. I used to disturb the drummers in the church then, because I just loved the art of drumming. However, along the line, a prophet revealed that my dad should buy me a drum because I was destined to be a musician. My dad obeyed the instruction and bought me a samba drum on my fifth birthday. Ever since, I have never looked back, I have been drumming. After my primary and secondary school education, I decided to go into music full time as a conga player and general percussionist, and here we are today.
Who were your early influences?
Jazz, juju, Afrobeat and reggae influenced me a lot. That’s why when you listen to my music; it’s a broad spectrum of genres. That was why I decided to name my style ‘Afro-folklore traditional percussive music’.
What were your initial challenges?
I had a lot of challenges, especially with my band members. Sometimes, we call for rehearsals and nobody shows up. Sometimes, we have to start begging for shows here and there, and then after such shows, you don’t get paid (laughter).
Were your parents supportive?
I did not really stay with my parents. At the age of 12, I moved out and ever since I’ve been on my own. However, none of my parents was against my decision to be a musician, and the skill is inbuilt; it’s a talent.
How many albums have you released till date?
For now, I have only one album, which I released in 2009. It wasn’t easy. I was selling it up and down myself, but I have another one coming out in May. It is going to be released by an international record label. It’s entitled ‘Ona La’ while the first one was ‘Ajo’.
Your style of music is not that commercial. Are you sure you’re making money from music?
Yes, my kind of music is not commercial, but it is the mercy of God that’s sustaining me (laughter).
In your music, you explore themes revolving around Yoruba spirituality. What does Ifa mean to you?
Yes, I sing in Yoruba language. The idea is that I want to promote my culture more, including my language, which makes my music spiritual. I believe in God and also in Ifa.
What has been your happiest moment as a musician?
My happiest moment was when my new record label signed me.
What of your saddest moment?
That was when a TV station invited me for an interview and I didn’t have transport fare to go. I had to beg people for money.
Nigerian music is currently making waves globally. What is your take on this?
It’s a great development. Davido and Wizkid are both very good artistes but I strongly believe that percussion-driven music would take its rightful position soon.
Which international artistes have you worked with and what is the future of jazz and folk music in Nigeria?
Nigerian jazz is coming on strong, we just need to get things right. I’ve worked with many international artistes like Tony Allen. I featured in his album, Secret Agent. I also featured in Nneka’s album, Soul is Heavy. I equally featured in the albums of Keziah Jones. I also participated in a project, Ten Cities, organised by Goethe Institute, which was sponsored by Goethe Kenya. Also, I took part in a project organized by the British Council called Gidi Jand, where I worked with Damon Alban, Baba Mall Amid and Maria from the African Express project.
What would you say was your best decision ever?
The best decision I have ever taken was going into music.
What are your dreams?
My dream is to be known all over the world for my music. I also want to embark on global tours. I did not give myself the tittle ‘The Master Percussionist’; people gave it to me due to my efforts.
***
Source: Sun News

‘I Have A Sugar Mummy’ – Nigerian Singer, Joeboy Opens Up

Singer, Lil Kesh Places Bet of N381K On His Father, Brags About His Tennis Skills (Video)