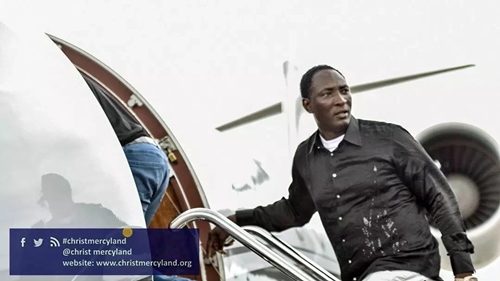 Prophet Fufeyin and his new jet (Ptuneo: cmdm)
The General Overseer of Christ Mercyland Deliverance Ministry in Warri, Delta State, Prophet Jeremiah Omoto Fufeyin, has joined the league of some Nigerian and African Christian leaders in the acquisition of a private jet.
The cleric and founder of Mercy Television, was captured on camera on a private jet yesterday along with his colleagues, Prophet-Shepherd Bushiri of Enlightened Christian Gathering (ECG) Ministries from South Africa, and Dr. Emmanuel Okereke, General Overseer, Global Success Ministries Lagos, Nigeria. 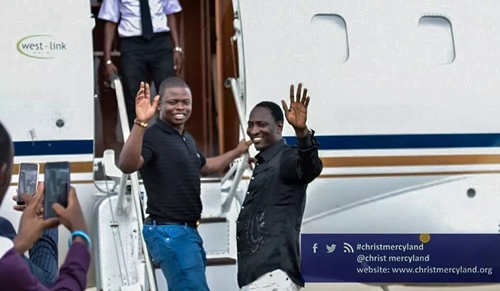 According to NAIJ.com, when asked why he bought a private jet, Prophet Jeremiah Omoto said, “Sometimes my schedules are tight.
“I travel a lot to do the work God sent me to do – preaching, prophesy and deliverance and its very stressful spending five to six hours on a flight just to minister for 2 hours.
“With a private jet, it’s more convenient and I think that is one of the reasons a lot of preachers have planes. 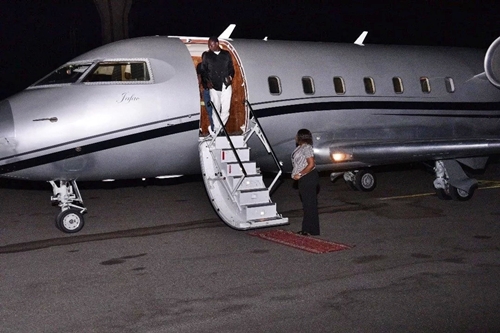 Speaking further, he said: “I know some people buy planes, but I can’t afford one; I believe my sons and daughters will bless me with one to help support the ministry.
“Private jet is a necessity and not a luxury for some of us deeply involved in the work of God to own planes.
“The jet we used yesterday was sent to take us to minister Gods word by one of my sons.”
--Advertisements--