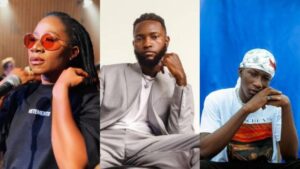 Nigerian veteran singer, Asa is currently facing a lawsuit filed against her and the production whiz, P.Priime, Platoon Music and Rue 11 by producer Tempoe.

In a news report by Pulse Nigeria, the lawsuit which was filed on the 1st of July alleges copyright infringement by Asa and P.Priime over the production of IDG which features Wizkid, and Love Me Or Give Me Red Wine.

According to the report, Tempoe originally produced the two songs while the released versions were produced by P.Priime following disagreement over the splitting of rights and financials.

Asa’s IDG which features Wizkid as well as Love Me Or Give Me Red Wine are both records off her fifth studio album, V which was released in February 2022 and distributed by Rue 11 and Platoon which is a music distribution company owned by Apple Music.

Presently, due to a court restraining order, the two songs have been taken down from all music streaming platforms and the court hearing has been slated for the 26th of September.

Details: The order was instituted over two songs, ‘IDG’ featuring Grammy-winning superstar, Wizkid, and ‘Love Me or Give Me Red Wine.’ Both songs were released as part of Asa’s 12-track fifth studio album, V.

It is alleged that Tempoe originally produced the two songs. But when an agreement could not be reached as regards rights and financials around one year ago, Asa allegedly sought out another hitmaker, P-Priime to produce the version of the respective songs, which made the album.

Platoon, a distribution company, is part of the suit because they act as a label services company, which has rights to the album, ‘V.‘ Thus, any decisions stemming from the album affects them and their investment. Pulse also gathered that before the issue became subject to legal settlement, Platoon was notified about claims of an infringement, but it proceeded to release ‘V,’ with the two songs in question.

It appears that P-Priime is a party because he was contracted to make two songs, and he proceeded to do his job. But this also affects him, because he earns from the two songs.

Content of the order: In the document numbered FHC/L/CS/262/2022, the plaintiff (Tempoe) made the following prayers in a Motion Exparte filed on the July 1, 2022;

1. AN ORDER OF INTERIM INJUNCTION restraining the Defendants/ Respondents jointly or severally whether by themselves, their assigns, agents, and servants howsoever from further distributing, offering for sale, performing any of the said musical works titled ‘IDG’ and ‘Love Me or Give Me Red Wine’ in whatever manner pending the determination of the Applicant’s Motion on Notice.

2. AN ORDER granting leave for the Plaintiff/ Applicant to publish a copy of the enrolled order that may be made pursuant to this application in at least one (1) national newspaper circulating in Nigeria.

3. AND for such further order(s) as this Honorable Court may deem fit to make in the circumstances.

UPON READING through the said Motion, its supporting Affidavit of four (4) paragraphs deposed to by Gboyega Aina, Adult, Male, Nigerian of Osuntuyi & Tokan – Lawal Law, 19A Akinosivemi Street, Ikeja, Lagos as exhibits marked “TI-T7” attached thereto and Written Address signed by Adefoworola Tokan• Lawal Esq. Counsel to the Plaintiff/ Applicant all filed at the Federal High Court Registry Ikoyi Lagos on the 1st day of July 2022.

What the court held: After hearing Osuntuyi Esq., Counsel to the Plaintiff/Applicant move in terms of the motion paper. And having carefully considered the application and submission of Learned Counsel, the presiding judge, P. O. LIFU UP found that;

1. That the Defendants/Respondents are hereby restrained whether by themselves, their assigns, agents, privies and servants or anyone acting on their behalf from further distributing, offering for sale and performing any of the said musical works titled ‘IDG’ and ‘Love Me or Give Me Red Wine’ in whatever manner pending the determination of the Applicant’s Motion on Notice already filed which shall be served on the Respondents within seven (7) days from today.

2. That leave is hereby granted to the Plaintiff/Applicant to publish a copy of the enrolled order herein made in at least one (1) national Newspaper circulating in Nigeria.

3. That due to the impending Court annual leave, the return date for the hearing of the Motion on Notice is herein fixed against the 26th day of September, 2022.

The document was “Issued at Lagos, under the Seal of the Court and by the hand of the Presiding Judge, this 20th day of July, 2022.”

Meaning of an interim injunction: As the word ‘interim’ suggests, it is a preliminary order, made by a court of competent jurisdiction, to prevent someone from doing something, until there is a full trial to solve the disagreement, from whence the injunction could become perpetual.

In this particular case, it was sought by Tempoe’s team, to prevent Asa, Platoon, P-Priime and Rue 11, from further publicizing, using or earning from the two aforementioned songs.

Why this suit matters: Nigerian music has been bustling with copyright related issues over the past few years, particularly related to commercials and rights. This is due to the culture of nonchalance and ‘any way na way,’ that Nigerian music has become accustomed to since the 90’s.

In the past, producers seldom knew their rights, and neither did songwriters. These days, every composer has become accustomed to their rights, and it has become important to show companies and individuals, that the Nigerian legal and court systems can be functional and reliable.

Just a few days prior to Pulse’s knowledge of this suit, music producer and singer, Mizzle, accused Blaqbonez of reproducing a song that he had earlier created with Blaqbonez, after a financial disagreement. A lot of these things happen because Nigerian music producers have become accustomed to better treatment, since the foreign companies started coming into the continent.

This also happens because some artists constantly feel like certain producers have started overplaying their hands, their importance and the importance of their production/beats, to make excessive demands on commercials and financials. As such, they sometimes seek to recreate certain songs with another producer, after a disagreement.

“It’s the new pandemic,” says a music exec. “We have impressive producers who have seen money, and are now rightly and understandably playing by those standards. But they fail to realize that compromise is also important in certain situations. However, I also understand that when you constantly compromise, you lose your value because people respect resolute people, who give of the perception of ‘premium.‘ This then forces artists to sometimes recreate songs.”

Predicting the fate of the suit: Based on the trajectory of similar suits outside the country with a similar jurisdiction, suits like this can be complicated, especially if the album version of ‘IDG’ and ‘Love Me or Give Me Red Wine,’ are not a direct recreation of the respective songs, initially produced by Tempoe. In this case, ‘direct recreation’ would mean first-class imitation in original strings, melodies, drums and percussion, effects, and style of delivery by the artist.

But if the recreation is only an imitation – remote or second-grade, which retains the vocals of the Asa, as it was on the version created with Tempoe, then evidence would determine the level of imitation and similarities. In this case, an expert witness would have to be sought, and it would likely be a seasoned musicologist, who will break down the similarities or otherwise of the respective versions of both songs, produced by Tempoe and P-Priime.

But if the P-Priime version of both songs are a direct imitation or recreation of the Tempoe versions, then the case might have been decided before it started. Even then, the similarities would have to be established by expert opinion, and backed by evidence. It would just be a faster process.

Regardless, the decision in this suit is important because it will become a precedent for similar cases involving intellectual property. Its pace and success would also reestablish faith in the Nigerian legal and court system, amidst dwindling faith.

The importance of this Pulse Exclusive: While delivering its verdict, the court held three things. One of which was a leave, granted, “To the Plaintiff/Applicant to publish a copy of the enrolled order herein made in at least one (1) national Newspaper circulating in Nigeria.”