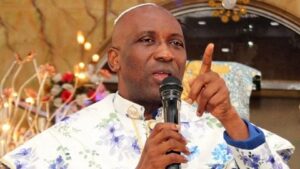 A prophecy by the leader Of INRI Evangelical Spiritual Church, Primate Elijah Ayodele about the Osun governorship election has failed.
Ayodele had predicted that Gboyega Oyetola, the incumbent governor of Osun would win last Saturday’s election.
However, Ademola Adeleke of the Peoples Democratic Party won the election.
He had prophesied, “In Osun State, the election will be volatile, they need prayers for the election so that God can take control.
“PDP will only try its best but I don’t see PDP flag in the state or any other party. It’s still APC. Governor Oyetola will retain his seat, he should just put more efforts.’’
However, to the prophet’s chagrin, Adeleke garnered 403,371 votes to defeat the incumbent governor who polled 375,027 votes.
Adeleke has since been declared winner by the returning officer for the election, Prof Oluwatoyin Ogundipe.
--Advertisements--