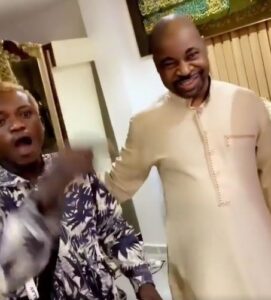 Controversial singer, Portable paid a visit to the chairman of the Lagos State Park and Garages Management, Musiliu Akinsanya aka MC Oluomo.

The visit came amid a probe by police after he claimed that he founded crime gangs in Lagos. Portable has since recanted.

Portable was seen in the video shared online hailing the former transport union boss, as the latter boasted about his influence in different areas of the state.