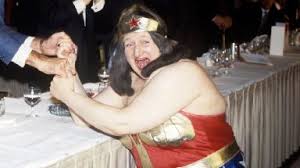 Comedy actor Bella Emberg dies aged 80
Tributes have been paid to the comedy actor Bella Emberg, who has died aged 80.
Emberg was described by Russ Abbot, with whom she appeared on The Russ Abbot Show as Blunderwoman, as a “a woman of immense warmth and generosity”.
During a television career spanning six decades, Emberg appeared in programmes including The Benny Hill Show, Doctor Who and Z Cars.
She had recently finished filming In The Long Run, a Sky One comedy created by Idris Elba, the BBC said.
However, she will be best remembered for her turn as Blunderwoman, the comic sidekick of Abbot’s Cooperman in the 1980s.
Abbot said: “It is with a heavy heart that I heard the news about Bella. She was not only a great sport but a huge comedy talent. A genuinely funny woman, I count myself very lucky to have worked alongside her. She really was a one off.”
Les Dennis, who appeared on The Russ Abbot Show, shared a ptuneo of him and Emberg on Twitter.
So sad to lose the lovely Bella Emberg. A funny, lovely friend. Thoughts and love with Rosemary. Goodnight Sweetheart x.
Source: Guardian UK
--Advertisements--